A record-breaking win for Arsenal, in front of 600 hardy souls.

Or is it the biggest win? If we view purely in terms of competitive matches then yes this victory over Loughborough is the biggest for the club. It has been matched twice in friendlies, most recently in 1965, as well as an FA Cup first qualifying round victory over Ashford United in 1893. 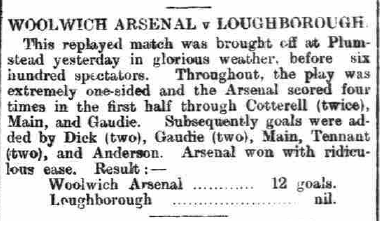