A member of the double-winning squad that emulated the feat of their north London neighbours ten years previously. The most iconic goal celebration at Wembley bar none. Arsenal hero. From the North Bank to the hallowed turf.

As a player, George played in relatively few North London Derbies and was only on the winning side once. When that once was winning the league title in 1970-71, it does not really matter, does it?

This was the moment when the 1971 double winning squad really broke up. Others had left before: Kennedy had gone to Liverpool, McLintock to QPR, Graham to Old Trafford. Those that remained would be sold within two years or retiring.,

When you think of the reaction that Sol Campbell had when he joined Arsenal, it is probably just as well that the internet was not around at this time. A complete meltdown would no doubt have ensued had he signed for Tottenham.

As it was, he broke their hearts and signed for Derby County on July 2nd, leaving his Arsenal reputation unsullied. 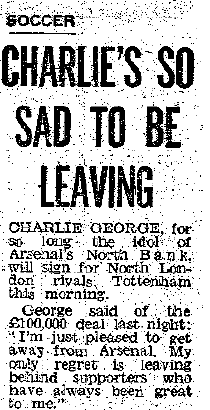 1 thought on “Charlie George To Leave Arsenal For Spurs On This Day, 30th June 1975”