That is often overlooked when this match is remembered. O’Leary was making his 622nd appearance for the club and crowned it with a goal, a rarity in itself. In today’s footballing world, it is difficult to see anyone coming close to this number of appearances for Arsenal. I am sure that they will in due course but it is not something you would want to be holding your breath for.

The match was heading towards its conclusion with visitors Norwich hanging on for their point with the scores at 3 – 3. Norwich had established a two-goal lead which the Arsenal full-backs, Winterburn and Dixon, had pegged back. The Canaries then retook the advantage before O’Leary’s goal sixty seconds later.

As the game headed towards its conclusion, referee George Tyson stepped in to award Arsenal a second penalty, a decision which sparked a 21-man brawl in the visitors penalty area. Lee Dixon delivered the knockout blow for Arsenal following Bryan Gunn’s initial save.

As an aside, I cannot find another instance of the Arsenal backline contributing all of the goals when Arsenal have scored four or more.

The punishments meted out by the FA for this? That’s a story for another day although in no way should the Police Federation be accused of a kneejerk reaction. Not at all. 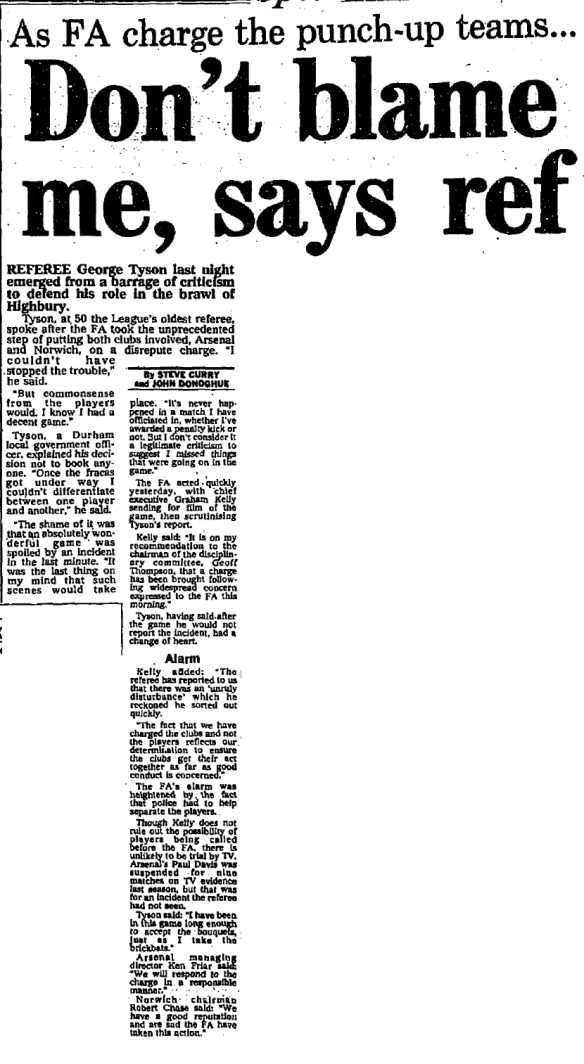