One in, one out, one just about to shake it all about as Terry Neill reshaped his Arsenal squad. John Radford left the club for £80,000 (£1m in 2012) ending a twelve year association which had seen him lead the Arsenal line in winning the double in 1971, Fairs Cup in 1970 whilst losing the League and FA Cup finals in 1968, 1969 and 1972. He wasn’t the last member of the double-winning squad to leave but their numbers were dwindling.

Alan Hudson joined Arsenal from Stoke City for £200,000 (£2.5m in 2012) with a reputation for being one of the game’s entertainers at the time. He was undoubtedly gifted but with it came what can best be described as an ‘artistic temperament’.

English football was suspicious of Hudson and his ilk. Despite the footballing lessons handed out since the 1970 World Cup in Mexico, the English game had ploughed its long-ball and physical furrow. Had he been born in another country, Hudson might well have gained more than 2 caps, perhaps even a different manager.

All this spelt the end of Alan Ball’s time at the club although he would hang around for another fortnight before signing for Southampton. 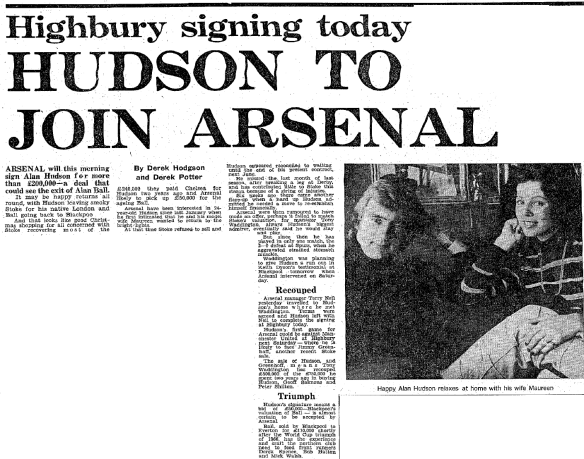