This 5 – 1 victory is Arsenal’s record win over Chelsea at Stamford Bridge, the first time they had scored five on the West London turf. It was a meeting between two franchise football teams, Arsenal were well ensconced in Islington by now and Chelsea? They were created to take a place in the Football League, not even managing a season or two of friendlies beforehand. Little wonder that Sir Henry Norris hated them with a passion.

I quite like the withering description of Chelsea’s performance from The Daily Worker at the bottom of these clippings.

Having drawn in the original match, Chelsea and Arsenal had a quick-fire replay at White Hart lane. Arsenal emerged victorious and won the right to face Newcastle United at Wembley the following month. 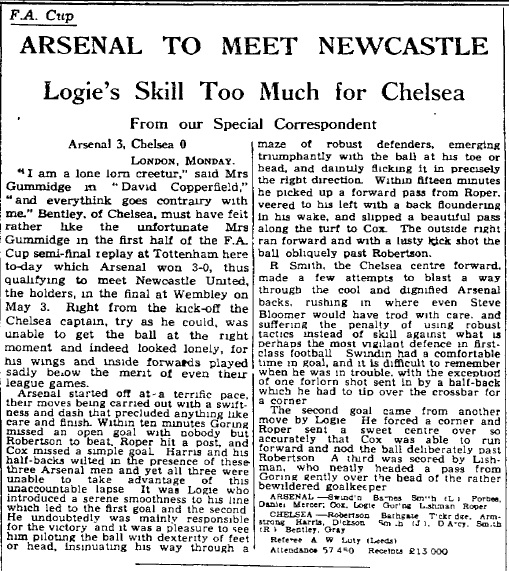 Newcastle awaited the victors but Arsenal and Chelsea fought themselves to a 1 – 1 draw at White Hart Lane sixty-one years ago today.

Another FA Cup semi-final, the club’s first since the cessation of the Second World War.

This is the replay at White Hart Lane, the two sides having previously drawn 2-2 at the same venue. It was Arsenal’s fourth consecutive success at this stage and the prelude to more cup glory at Wembley.

A little bit of history repeating itself would not go amiss this afternoon! And a great headline to boot.

1932 was a busy season in terms of consolidating the identity of Arsenal in Islington. The tube station at Gillespie Road had been renamed to Arsenal. The West Stand had opened to the public for the visit of Newcastle United on 12th November 1932, the announcement made a few days prior to that match.

This was the official opening with the match almost a sideshow. Chelsea obliged by collapsing to a 4 – 1 defeat. Interestingly, the newspapers estimated the crowd to be in the region of 60,000; officially it has been recorded at a shade over 53,000.

Arsenal One Two Five has scans of the brochure of the day.

A wonderful hat-trick. That’s all that needs to be said.

Arsenal were the defending champions, trying to emulate the achievements of Huddersfield Town a decade previously in winning the title in three consecutive seasons. This was Arsenal in all its pomp and the fans were drawn to witnessing them.

It means that Arsenal have been the visiting side on all occasions a new highest attendance record has been set in the English top flight since 1933, the previous record to this being a crowd of 77,582 for their encounter with Manchester City at Maine Road that year.

If the image does not read immediately in the page, click on it and a new tab will open with the clipping at its correct size.